Woodstock Poster Designs: Then and Now

This month marks the 50th anniversary of the Woodstock Music and Arts Fair, the three-day music festival that took place in Bethel, New York, in August, 1969. For five decades, Woodstock has stood as an icon of the hippie movement and American culture. The festival brought together half a million people with the promise of three days devoted solely to peace, love and music. There was no social media to invite friends, or a fancy website to promote the event. No sirree. The iconic Woodstock poster was their main form of promotion. That and word of mouth, radio shows and alike.

To commemorate its 50th anniversary, the Bethel Woods Center for the Arts – a museum and cultural center located at the site of the original festival – held a nationwide poster design contest. And just as Woodstock was no ordinary music festival, Bethel Woods proudly declared that this was no ordinary poster design contest. Students, amateurs, and professionals alike were called to design a poster that best embodied the spirit of Woodstock and highlighted their own individuality and passion.

Out of 273 entries, the poster designed by Tim Gralewski, a graphic designer who teaches at the University of Michigan-Flint and Oakland University, came out on top. Gralewski has been awarded a cash prize of $2,500, as well as $1,500 for travel and lodging to visit Bethel Woods on June 5 to take part in the “Power of the Poster,” a panel discussion with design luminaries David Edward Byrd and Frank "Fraver" Verlizzo. Gralewski’s award-winning poster will also be featured throughout Vibrations, an eight-part series that looks at how the legacy of the past speaks to movements of today.

Gralewski and his competitors challenge was two-pronged: They needed to design a unique poster, but they also had to pay tribute to the iconic original poster from 1969 without mimicking it.

Check out our comparison of the two posters below to discover Gralewski’s take on one of the most iconic images in music history: 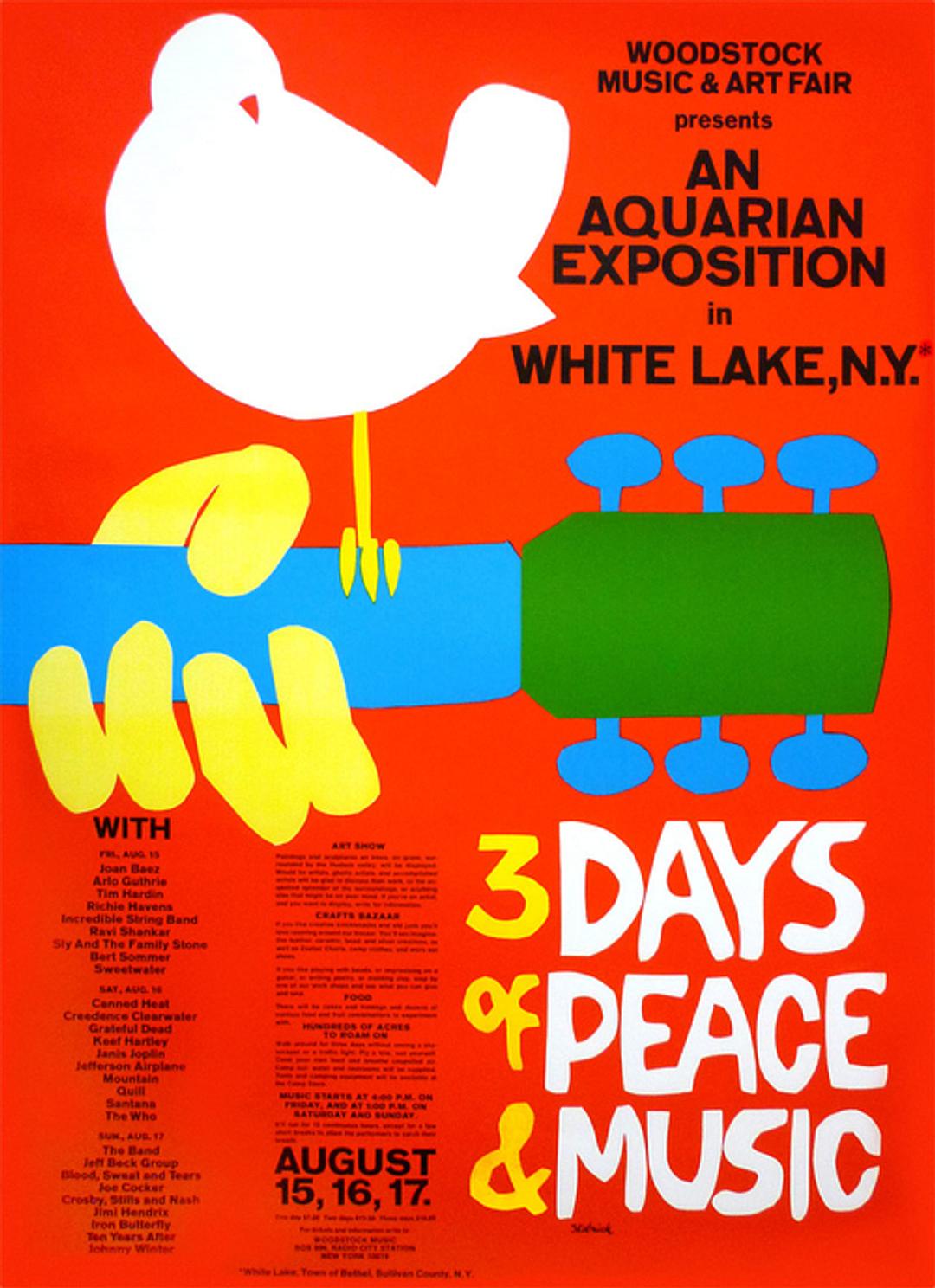 Created by graphic designer Arnold Skolnick, the original Woodstock poster features the iconic dove and guitar that has been associated with the festival for the past five decades. Originally, the symbol was a catbird and a flute.

Skolnick was staying on Shelter Island, near Long Island, N.Y., when he was asked to design this poster. While there, he constantly drew the catbirds that inhabited the area. Those catbirds became the iconic dove. “It sat on a flute for a day, and I finally ended up putting it on a guitar,” Skolnick explained. Cut out on a piece of paper, Skolnick delivered this minimalistic, yet historical poster in only three days time.

Skolnick’s choice of bold, colorful typography successfully mirrored the hippie vibes of the times. In accordance with the ideology of peace and equality, the band names were all kept in equal size and listed in a non-hierarchical alphabetical order.

In the midst of the Vietnam War, Woodstock served as a promise of three days in which peace and music would live in harmony. Skolnick’s 1969 poster embodies all things Woodstock, and it remains revered to this day as one of the most important visual symbols in music history. 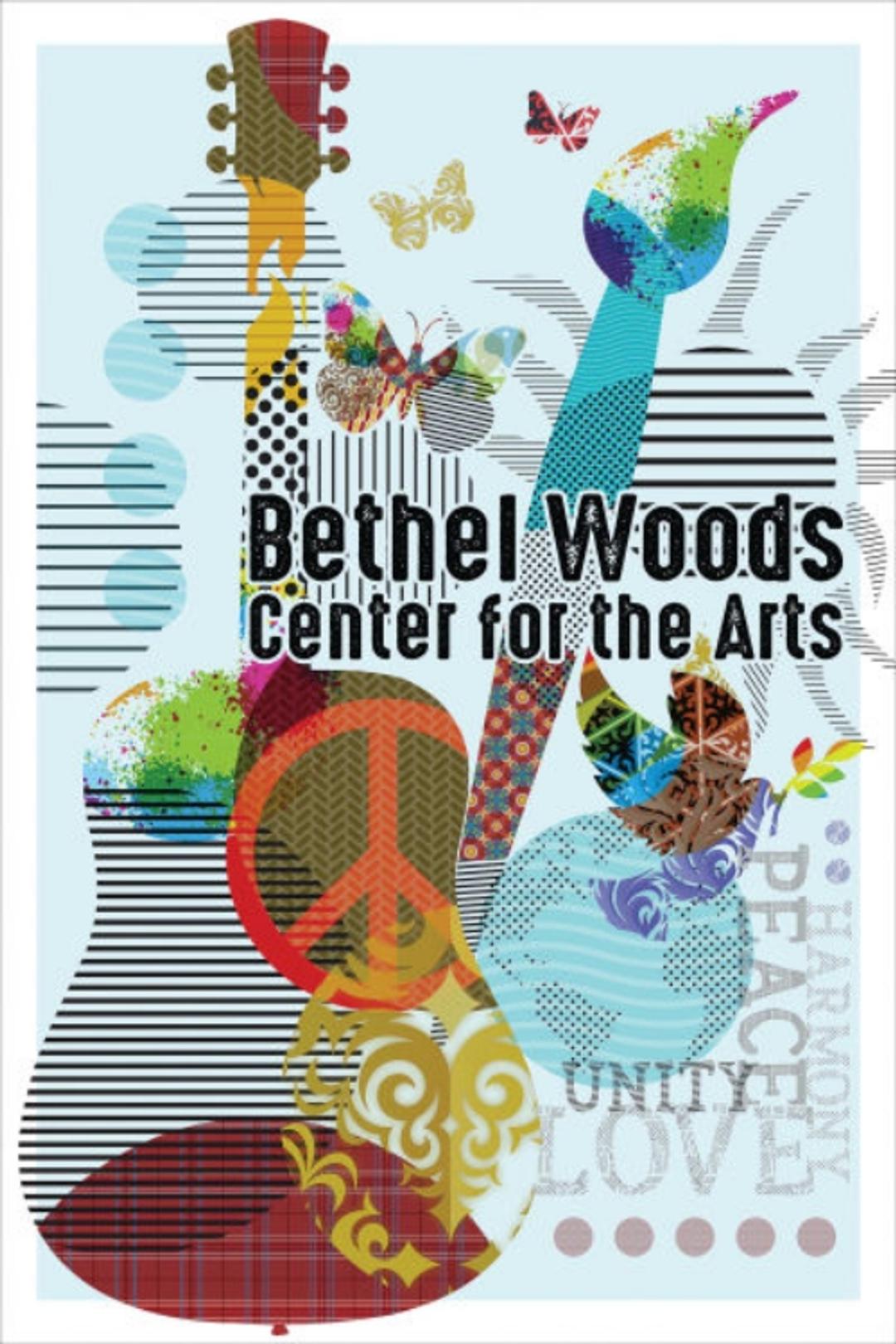 When approaching his poster design, Gralewski knew that he had to pay tribute in some way to the original Woodstock poster without imitating it too closely. Gralewski’s solution was a collage that features a vertical guitar – as opposed to the original poster’s horizontal guitar – with a peace sign, butterflies and one dove.

“I have my own design aesthetic,” Gralewski explained to the Detroit News. “I work a lot with silhouettes, and then within those I’ll add texture or patterning. In this case, I started with the guitar.” This gave the poster a distinctive look that still referenced the 1969 poster.

“The thing I liked is that it was a terrific, clever shout-out to the late 60s and 70s,” says Verlizzo, whose impressive portfolio features countless original Broadway poster designs, including The Lion King, Sweeney Todd and Sunday in the Park with George. “[It’s] perfect for a 50th anniversary. Tim’s technique borders on fine art, though it’s also graphic commercial art.”

With creativity, uniqueness and inclusion of design elements from the original poster, Gralewski successfully channeled the spirit of Woodstock through his design.

What Can We Learn?

So, what poster design lessons can we take away from the Bethel Woods contest?

Poster design is all about individuality and channeling one’s creativity. It’s about knowing what you want to say and finding a unique, effective way to say it through design. Guidelines, technique, and skill are all necessary ingredients to poster design. But a creative vision and a willingness to experiment and push the boundaries of graphic design are the stuff of iconic posters.

In the words of Verlizzo, “To me, the most important thing in poster design is to look distinctive and a little unique.” And if that’s the bar for excellence, Gralewski nailed it.

Haley Grant is an American writer based in Madrid, Spain. A world traveler, Haley is also a huge fan of “Sex and the City,” spin classes and chugging iced coffee.