Why Design Matters: It Impacts Your Bottom Line

Not so long ago, in a galaxy not so far away, good design was considered a frill. Those days are gone for any company that wants to thrive in the 2020’s and beyond. With smartphones, tablets, and digital interfaces at every turn, design now affects nearly every consumer touchpoint for most businesses.

An October 2018 McKinsey report, “The Business Value of Design,” put the impact of design on your bottom line in context: Over a five-year period, companies that invested in good design had 32% more revenue and 56% more total returns to shareholders.

In early 2019, InVision released “The New Design Frontier: The widest-ranging report to date examining design’s impact on business.” In it, they identified five levels of design maturity—Level 1 being the least mature and Level 5 being the most. Companies at Level 5 have pretty much institutionalized design throughout their entire organizations, and 92 percent of them said they could draw a straight line between their design teams' work and their company's revenue. Eighty-four percent of those same companies said design had improved their ability to get products to market, while 85 percent said they'd been able to deliver cost savings through design.

Smart companies are investing in good design for good reason: It’s good for the bottom line.

The Visionaries Who Got Us Here

The business value of design has been trumpeted for decades by luminaries like industrial designer Raymond Loewy (responsible for the Coca-Cola bottle and logos for Air Force One, Shell Oil, Greyhound and the US Postal Service), Thomas J. Watson Jr. (IBM’s second president, who transformed the company’s now-iconic aesthetic) and, most recently, Steve Jobs (former Apple CEO whose obsession with product design kick-started a revolution in tech). It’s only recently, however, that the business value of design has truly gained mainstream recognition.

"Good appearance [is] a salable commodity." ”

Raymond Loewy originated a technique known as streamlining that ultimately revolutionized industrial design. He called it “beauty through function and simplification” and boosted the entire profession by showcasing the practical benefits of functional style. In his book, Industrial Design, Loewy explained, “Success finally came when we were able to convince some creative men that good appearance was a salable commodity, that it often cut costs, enhanced a product’s prestige, raised corporate profits, benefited the customer and increased employment.”

In 1956, Thomas J. Watson Jr., determined to put his stamp on IBM, hired Eliot Noyes, respected architect and curator of industrial design at New York’s Museum of Modern Art. Noyes was brought on as a design consultant with the goal of creating a first-of-its-kind corporate design program for IBM. Noyes had a revolutionary, holistic vision that would incorporate everything from IBM’s product lines to its buildings, décor, logos and marketing.

It marked perhaps the first time in which a business organization itself—its management, operations and culture, as well as its products and marketing—was conceived of as an intentionally created product of the imagination, as a work of art. Noyes wrote, “In a sense, a corporation should be like a good painting; everything visible should contribute to the correct total statement; nothing visible should detract.”

Watson knocked it out of the park with Noyes. Steven Heller, author and longtime design director at the New York Times said, “The impact [he] had was incredible. He oversaw the modernization of all aspects of the brand. IBM became the company to beat, the paradigm of the modern corporation.”

"Simplicity is the ultimate sophistication." ”

Fast forward 20 years to Apple’s first marketing brochure, “Simplicity is the ultimate sophistication.” That maxim and Steve Jobs’ obsession with design fueled the biggest revolution in the history of tech design and built an almost cult-like following for Apple’s products. Jobs wanted all of his products to be beautiful, clean, friendly, and fun. That ethos of simplicity in design along with a willingness to push the envelope in product development has made Apple an absolute behemoth; a powerhouse that shows no signs of slowing down.

Apple’s success has hinged on creating highly intuitive interfaces that make their products accessible to anyone. They have shaped an entire industry with design at its center. So much more than a frill or an afterthought; form is now equally as important as function. Even their fiercest competitors, Samsung, Microsoft, and Google have mimicked Apple’s clean, bright design aesthetics. 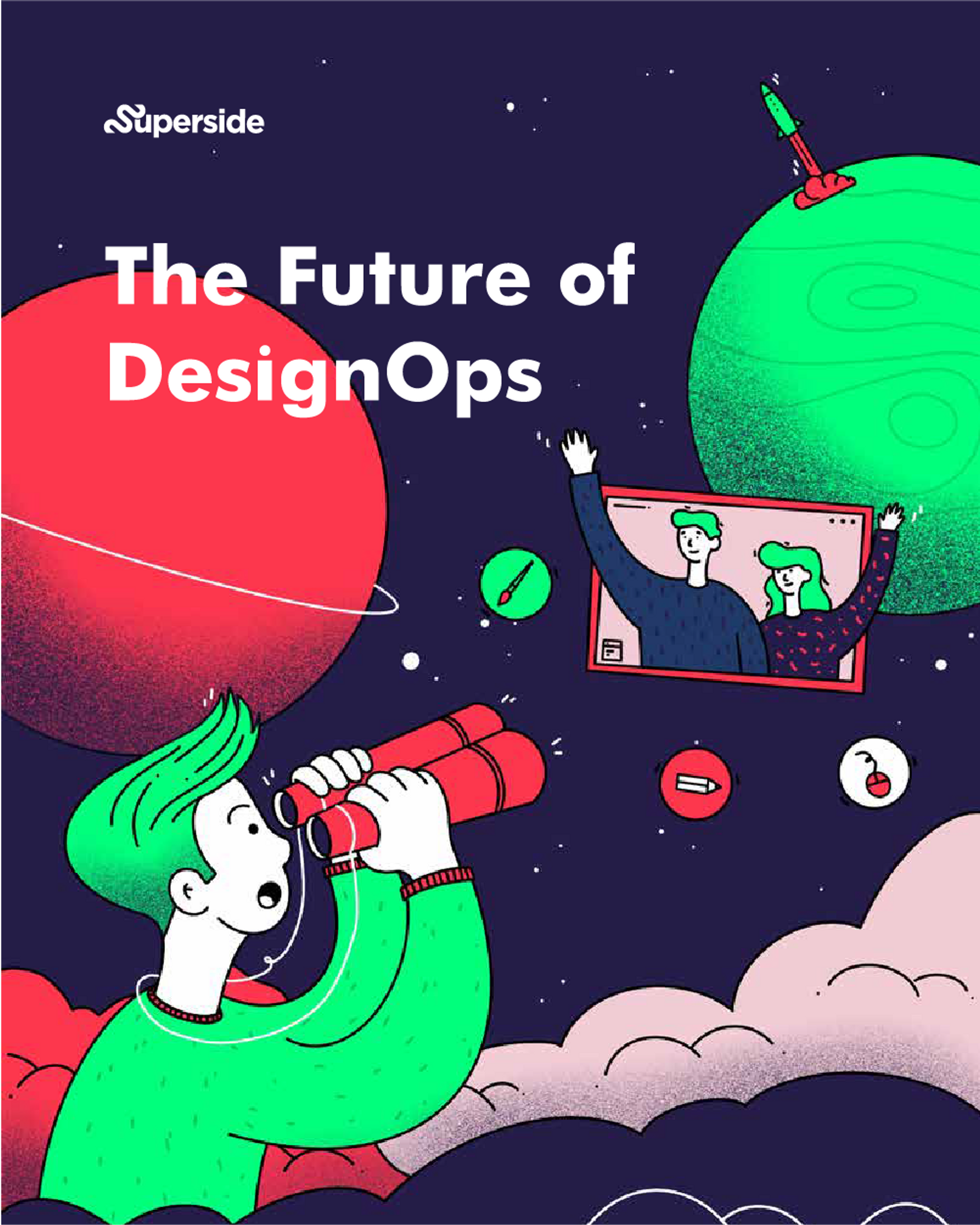 The Business Value of Design — Quantified

In October 2018, McKinsey released a report aiming to “study the design actions that leaders can make to unlock business value.” To do so, they tracked the design practices of 300 companies in multiple countries, over a five-year period. The study spanned three industries: medical, technology, and retail banking. McKinsey collected over two million pieces of financial data and recorded over 100,000 design actions.

The McKinsey team used advanced regression analysis to uncover the 12 actions that show the greatest correlation with improved financial performance and then clustered those actions into four broad themes. Those themes formed the basis of the McKinsey design index (MDI), a metric that rates companies’ strength in design and how that links up with their financial performance. 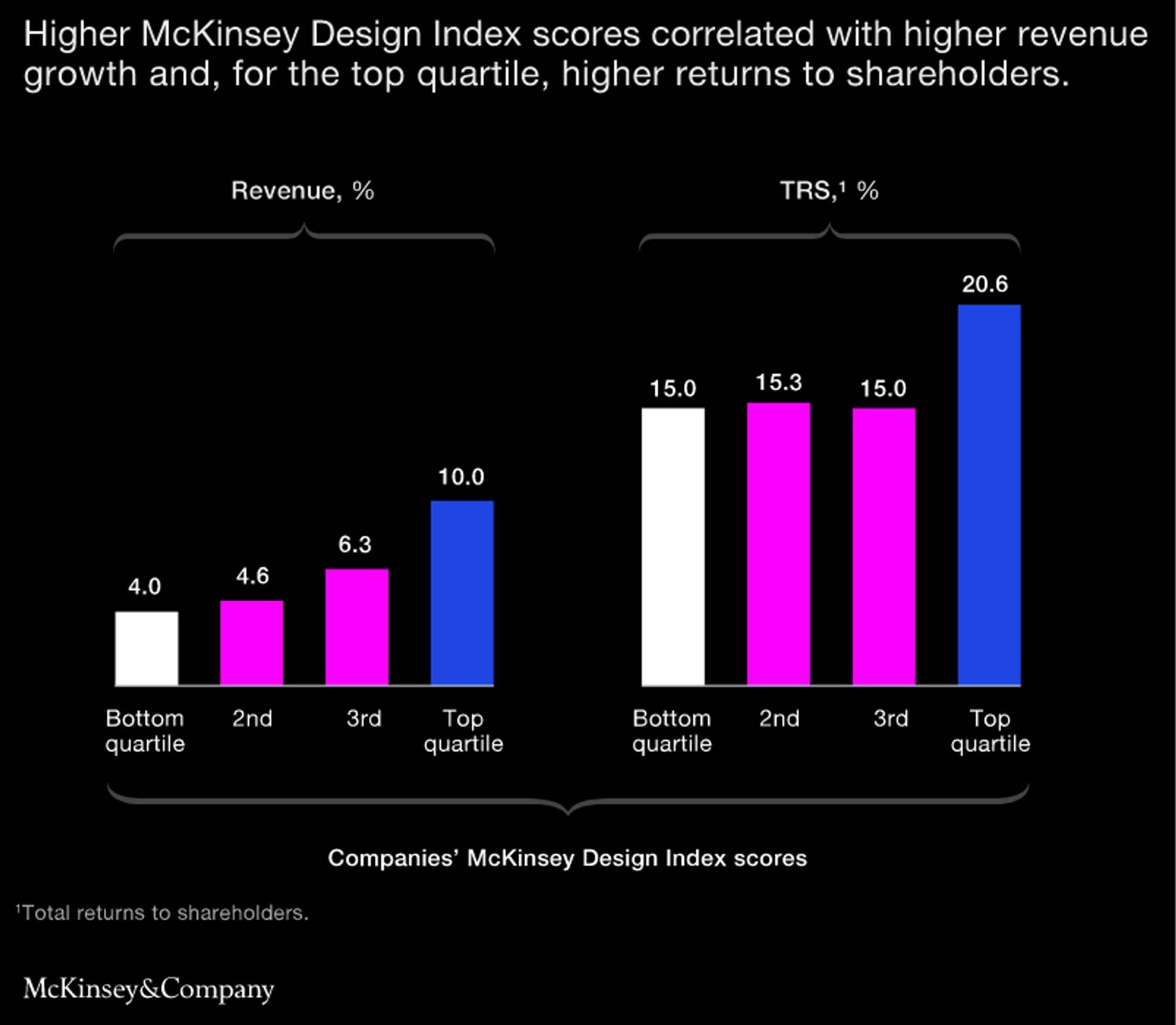 Their findings reveal a strong positive correlation between valuing design and superior business performance across all three industries, indicating that good design impacts the health of your bottom line whether your company deals in “physical goods, digital products, services, or some combination of these.”

—from the McKinsey Quarterly report, “The Business Value of Design”

InVision’s 2019 report, “The New Design Frontier,” surveyed 2,200 companies—from large enterprises and governmental organizations to small businesses and NGOs)—spanning 24 industries to see how design helps create better business outcomes. The more mature the design function was at each organization, the more directly its positive impact was felt on the bottom line. The study authors wrote, “Organizations that embrace and integrate design practices also report more positive business outcomes, including when it comes to product, position, profit and more.” Companies with mature design functions are also reshaping product development and corporate portfolios that further drive the business and place the organization at the vanguard of its industry.

With rapidly evolving consumer expectations driven by companies like Amazon and Google and more people, platforms and companies competing for consumer attention spans than ever before, standing out from the crowd is a challenge.

Benedict Sheppard, a partner at McKinsey who leads product development and design practices in the U.K. says, “We’ve just seen over the last five years, this explosion of senior business leaders saying, ‘Help, we need to up our game in terms of product and service design.’ It’s getting harder and harder to make products and services stand out from the crowd.”

The good news is, there’s also more data available than ever before, allowing companies to pursue “user-centric, analytically informed design” in ways we never could have dreamed of when the first Mac launched.

Puzzlingly,  many companies have been slow to take advantage. According to McKinsey’s data, over 40 percent of companies surveyed still aren’t communicating with end users during development, and just over 50 percent have “no objective way to assess or set targets for the output of their design teams.” With no clear metrics in place to link financial performance to design functions, many executives are reluctant to divert resources to design. As anyone who has ever worked in innovation will tell you, a lack of C-suite buy-in can be crippling to any true systemic cultural or structural change.

Finding a dedicated design partner to help you stand out can be a daunting task. At Superside we offer a full range of design services with dedicated account managers and top talent from all over the world. Our team will help you put fantastic, user-centric design front and center, at an affordable price.

Amrita is a veteran B2B SaaS marketer and the VP of Marketing at Superside. Besides preaching to everyone and their mother about how good execution is the ultimate differentiator for your company, she hosts our monthly Gather & Grow Show featuring guests from PUMA, Wix, Intuit, Prime Gaming, Outbrain and more. Find her on Twitter @amritamathur and say hi!