Why Your Content Marketing Strategy Should Start With Video

When it comes to your marketing strategy, video content is the tide that lifts all ships.

Let me set a scene for you. You’re having a house party. Your friend, let’s call him “White Paper '' shows up first and you’re a bit surprised because they’re not known to be all that much fun. Blogs and Case Studies arrive and they’re great, but they tell these loooong draaaaaawn out stories. Community is that tight-knit group from highschool that sticks to themselves while Social wants to talk to everyone—they just need something to say.

The party is off to a slow start. But just as people start checking the time, Video shows up and helps Blogs and Case Studies tell more engaging stories. They introduce White Paper to some people who actually find him interesting. They get Community to open up and make some new friends. And Social… let’s just say they’re not going home alone. The party was saved at the last minute. But what if it kicked off with a bang?

Video can take your marketing from snoozefest to rager by elevating all your other tactics. Plus, video connects with customers like no other content stream can. That’s why video should be the first person at your party and the first tactic of your content strategy.

The percentage of marketers who say video plays an important role in their strategy increased by 10% between 2017 and 2020. I’m going to show you why marketers should push that even further by making video the foundation of their content. The thing you should do before anything else.

Videos hit audiences right in the feels. Whether it's due to the 60,000 fallacy or the combination of sounds and visuals coming together to stimulate the senses, it’s widely accepted that video is the best way to tap into your audience’s emotions. That’s big for two reasons.

First, studies have shown that an emotional response to a video ad can have more influence over a consumer’s purchase decision than the contents of the ad itself.

Second, as Dan Carnegie said, “When dealing with people, you are not dealing with creatures of logic, but with creatures of emotion.” When looking at the performance of ads, a study from the University of Southern California showed that ads packing an emotional punch performed better than those centered on rational content.

So in the face-off between emotion and logic, emotion is better for turning prospects into customers. But why is that? Sometimes people want empathy before they want a solution. Emotional connections foster empathy and empathy builds trust. And trust? Trust drives sales.

Let's bring this back to the main point—why should marketers lead with video content? Because establishing that emotional connection first will warm up the crowd, making them more open to your other marketing assets. In this way, video marketing is your Trojan Horse. It gets your blogs, your case studies, and everything else inside the walls, giving them a better chance to succeed.

So, before putting out that How-To guide, publish a video to set the table by building that emotional connection. 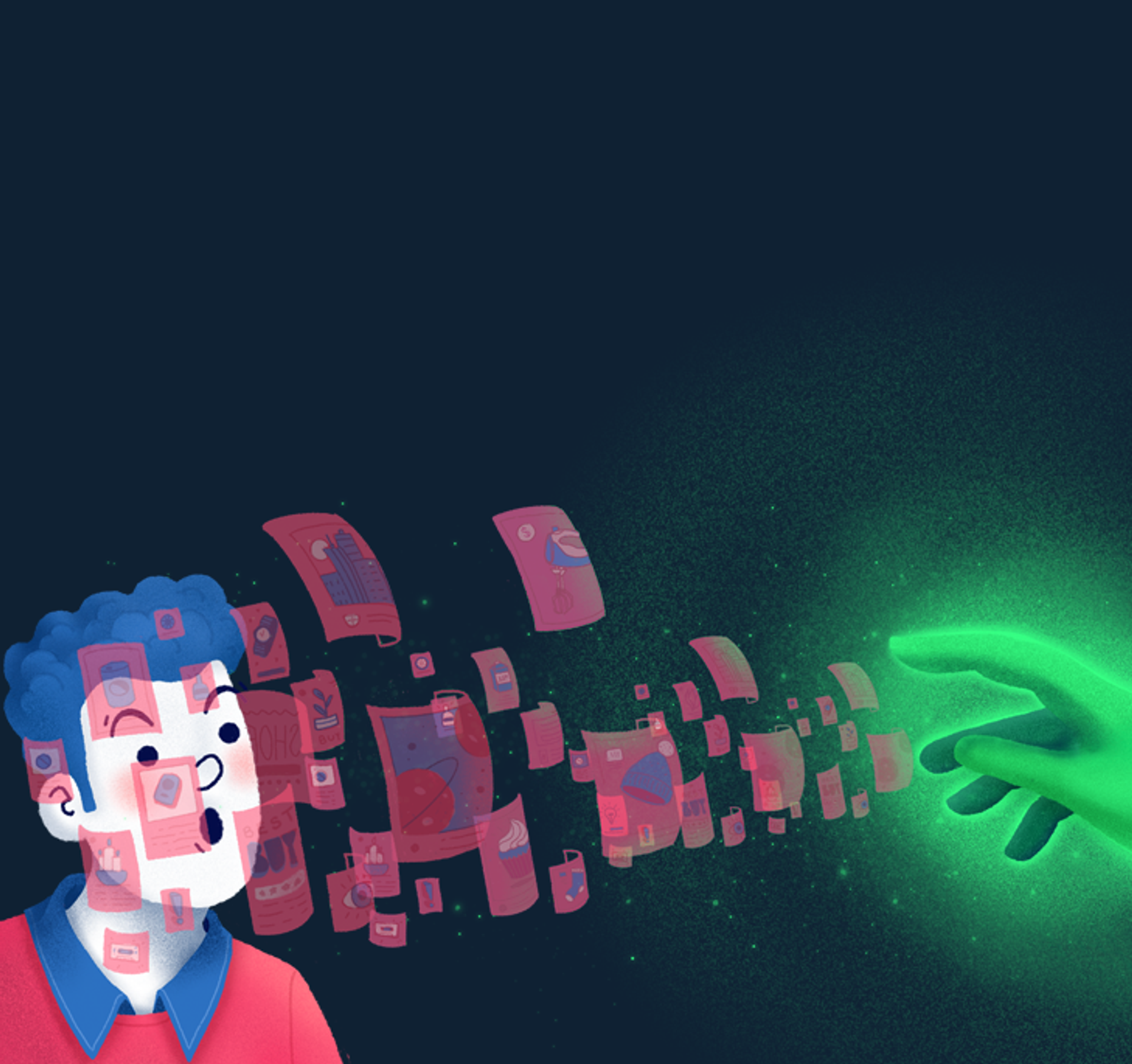 Taking a video-first approach can give your content strategy a massive advantage over your competition. We can help you get there.

Today’s marketers have a lot of mouths to feed and starting with video is the best way to cook up something for everyone in the least amount of time. Let’s say you’re doing a case study. By filming the conversation with your customer—a conversation you’d have to have anyways for a written piece—you’re setting yourself up to create additional content with almost no added work. Here’s how:

Truthfully, no one has time to create one-off content specifically made for SEO, for social, for community, for your mom’s friend Barb, and for this dog. You need to get as much juice as you can out of your content by repurposing and upcycling. 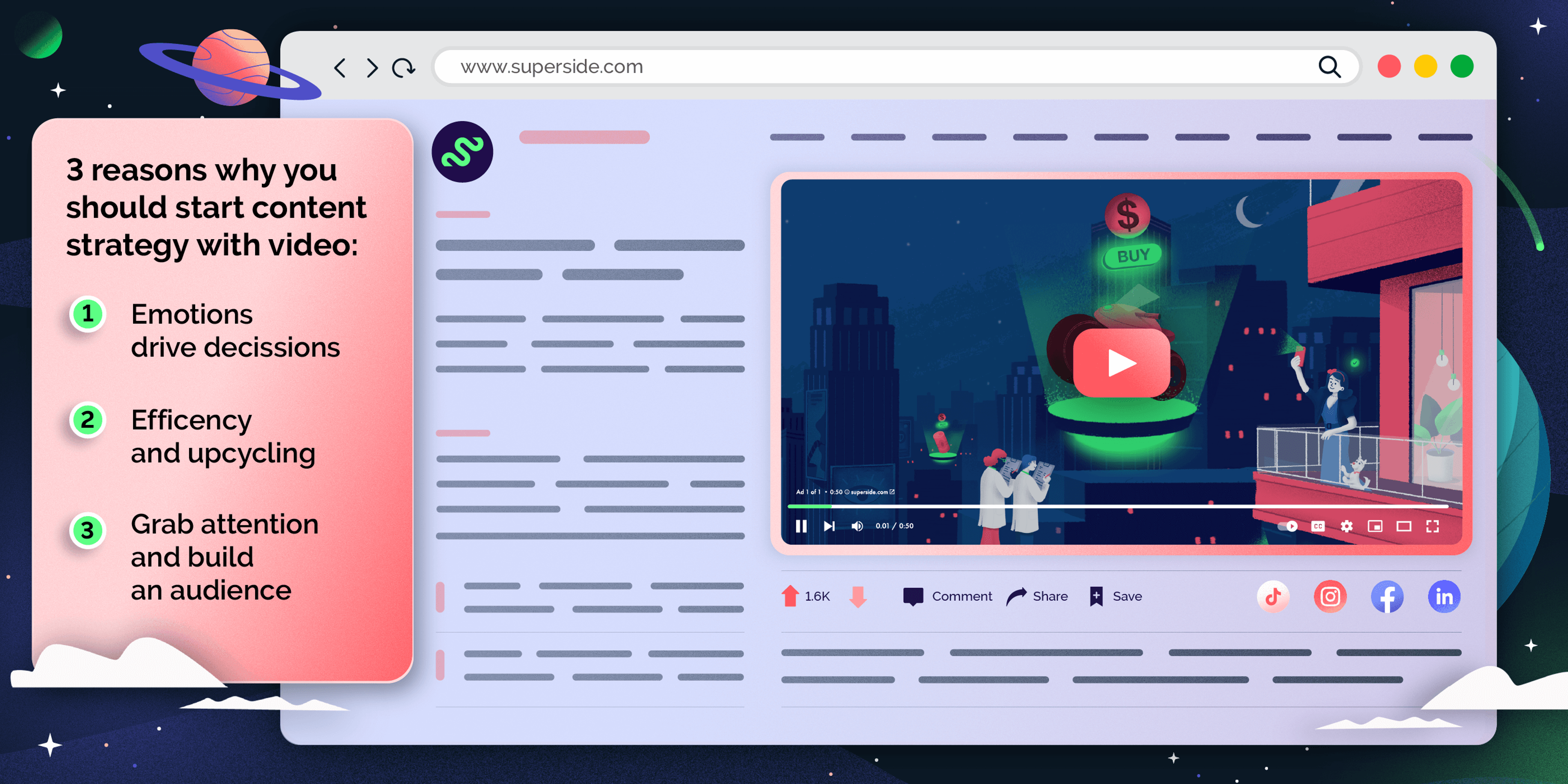 What do pop musicians do before they put out an album? They put out a single. The single doesn’t need to be the best song on the album nor does it need to be the most accurate representation of a musician’s unique sound. What it needs to do is appeal to the widest audience and get in as many ears as possible to generate the most buzz for the rest of the album.

For marketers, video content is your radio single. Not only do people spend around 16 hours per week watching online videos, but almost three-quarters of consumers prefer video marketing to text. Maybe that’s why in the time you’ve been reading this blog, almost 50 people will have signed up for TikTok.

While your whitepaper might have the most information and your demo may drive the most conversions, video builds an audience and marketers need that before anything else.

Lead the pack when you lead with video.

So did we lead with a video for this post? You better believe it. This blog started as a script. The same script that influenced the social posts, and adds the multi-media appeal to everything it touches.

Check out the video we led with here, and if you liked it, be sure to subscribe to our channel. We’re celebrating the launch of Superside’s new video service offering by dedicating our next few videos to...well...video. We’re talking about the different types of video marketing, which companies are killing it on TikTok, and of course running through the tips and tricks for you to level-up your video marketing. Stay tuned – or better yet, get in touch today.

Kyle is a Sr. Content Marketing Specialist at Superside. He speaks fluent metaphor, which you'll quickly learn by watching his videos and reading his articles.