These 7 Brands Show the Power of Color Branding

Growing up, you probably had a favorite color. In fact, you still may.

But what do you think when you see that color? What words come to mind? How does it make you feel?

Different colors have been shown to stir different emotions in us (both positive and negative) and create different associations. This is the psychology of color, and it has played a huge part in brand marketing over the years.

We have all heard the saying that “a picture paints a thousand words,” but even just a color can create as deep an association with a brand as any name or slogan. In fact, a 2005 University of Loyola study found that color can increase brand recognition by 80%. For example, the combination of bright orange and pink may spark an association to Dunkin', which even after undergoing a rebrand in 2019 kept their brand colors the same (because when you have great brand colors, you don't change them!).

In this post, we’re going to take a look at seven brands that have made a particular color their own (and sometimes literally own). Why did each brand choose the color they did? And how is that color likely (and intended) to make consumers feel, both consciously and subconsciously? 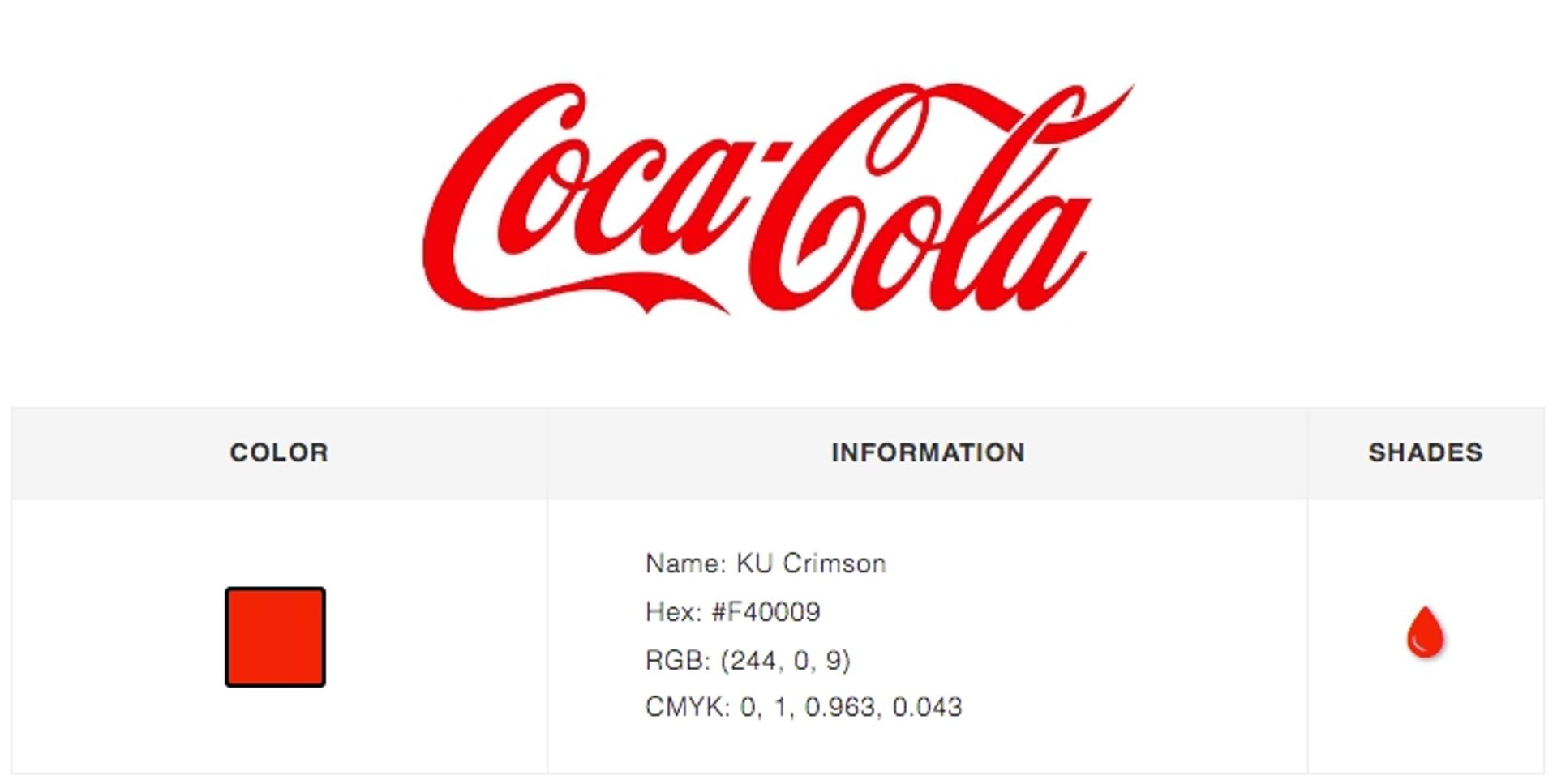 Reportedly, Coca-Cola’s iconic red (which, strictly speaking, is actually a mix of three different shades of red) originally came about for practical, rather than marketing, reasons.

The barrels in which Coke was transported in the 1890s were painted red in order to distinguish them from barrels containing alcohol. The color stuck and when Coke started to be sold in individual bottles, the red appeared on those, too.

From a marketing perspective, of course, the other piece of the puzzle is about creating the association between the color and the brand. And, for Coke, that meant applying it to all aspects of the Coke business – not just product packaging, but advertising, merchandise, and even its (now equally iconic) red-liveried trucks. There’s even the entertaining, (although invented, sadly) story that it was Coke that led to Santa Claus’ suit being red.

There’s no better example of Coke’s drive to put the iconic red front and center than in its most recent redesign – which it calls its ‘One Brand Strategy’.

As you’ll no doubt have noticed (that’s the power of the color, you see) the previously-black Coke Zero packaging (and, in many national markets, the Diet Coke silver packaging) has been replaced with an almost entirely red color scheme, visually very similar to the ‘classic’ Coke cans. And of course, visually very distinct from the blue, black, and silver packaging of its main rival, Pepsi.

What’s more, even if Coke’s choice of red wasn’t originally driven by consumer psychology considerations, it certainly turned out to be an appropriate choice for the brand. Red is a confident, bold color, that signifies passion, energy, excitement, and vitality – exactly the sort of emotions a brand like Coke might want to tap into. 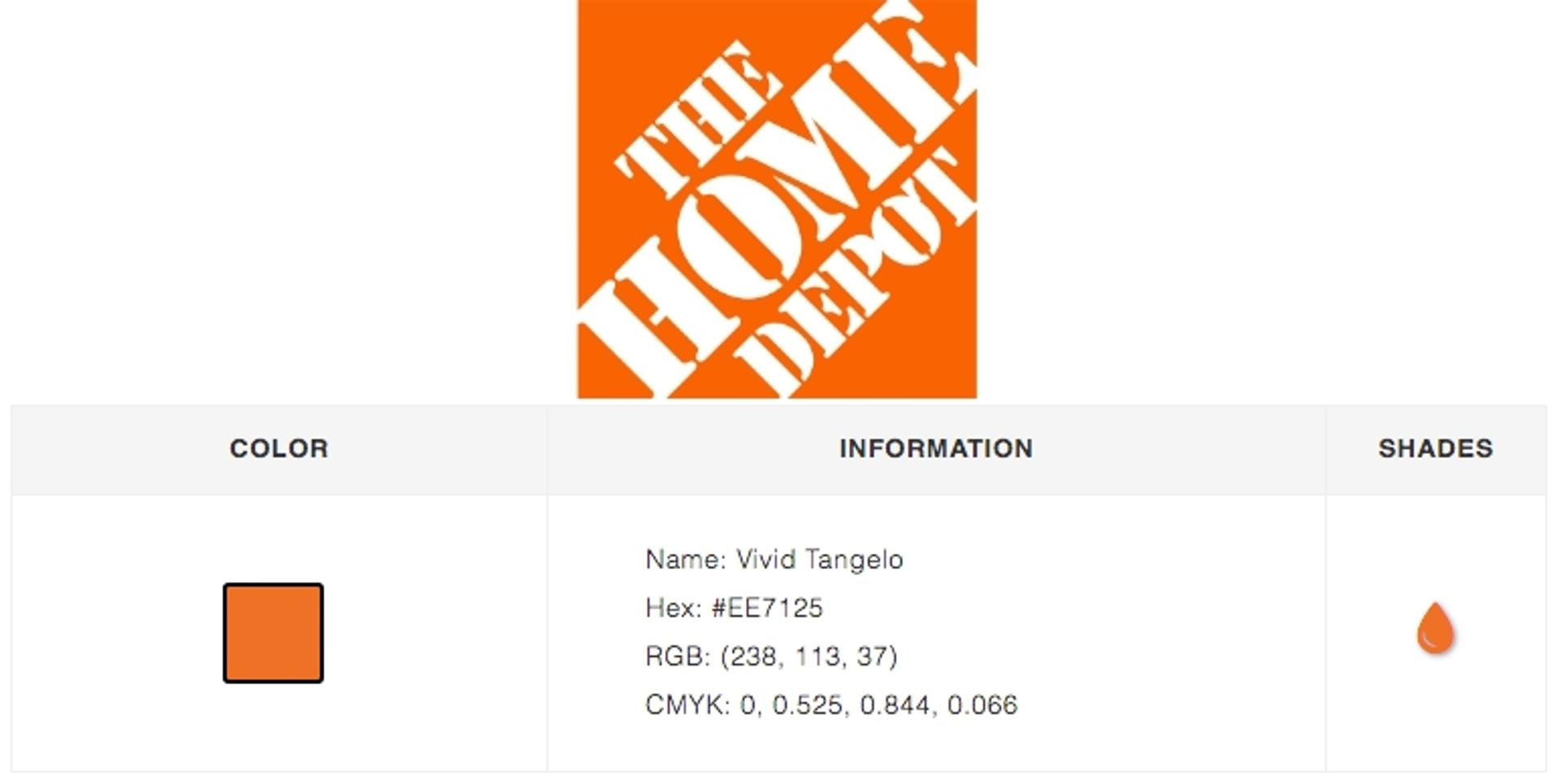 Home Depot certainly follows Coke’s lead in taking a single color and applying it as widely across as many aspects of its business as it can.

Walk into (or indeed outside) a Home Depot store and you will see that familiar orange color everywhere.  So central is the color to Home Depot’s brand that the company has successfully obtained a trademark over it.

But why orange? Well, as with Coke, the story of the ‘Home Depot orange’ (PANTONE 165 C) is more about practicality that any deep insight on the founders’ part into consumer psychology. As co-founder Bernie Marcus put it, “We painted our signs on bright orange circus-tent canvas, which cost a fraction of the more common electric signs.”

But again, it also happens to be the case that a number of the emotions associated with orange – optimism, affordability, friendliness, and spontaneity – also fit well with Home Depot’s wider brand message. So if you’ve ever gone to Home Depot and come out with several impulse purchases that you had no intention of making, blame it on the orange…

Interestingly, the UK’s largest DIY chain, B&Q – although not linked at all to Home Depot – has similarly chosen orange as its brand color. So much so that an American visiting Britain might wonder if they’ve stepped into a Home Depot by mistake.

For other ‘orange’ brands, think Nickelodeon, EasyJet, Hooters, Stihl, and – of course – Orange. 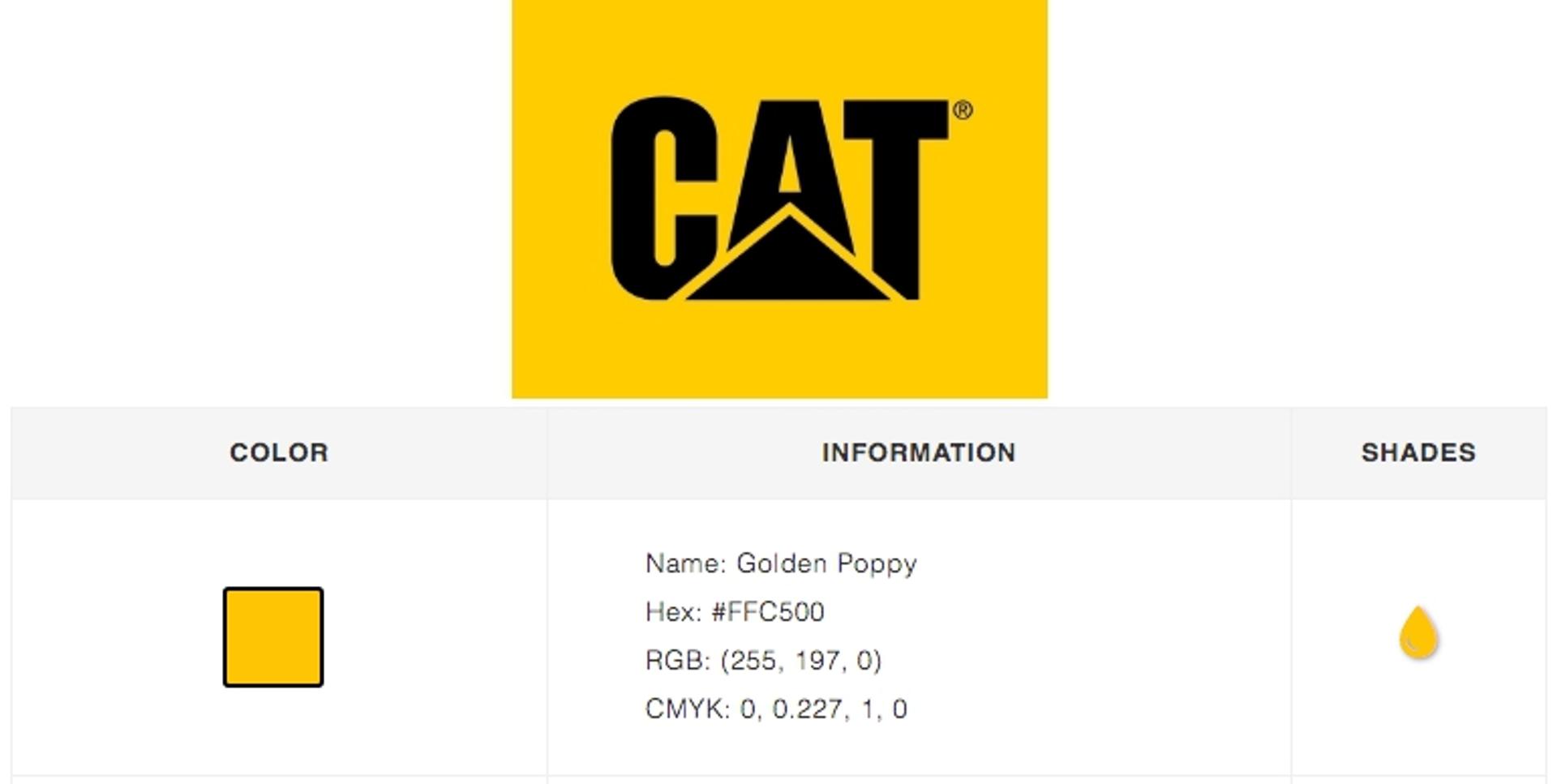 Caterpillar is a great example of how a color change can be the making of a brand.

Before it painted its machines in its distinctive (and now trademarked) shade of yellow, (PANTONE: 1235 C) Caterpillar’s machines were gray with red trim. Would the CAT brand have become so iconic if it had stayed gray?

Again, as a color choice, yellow is one part functional imperative (with such heavy machinery, visibility is a must and yellow catches the eyes quicker than other colors) and one part highly effective - even if accidental - brand psychology.

It is the former which made Caterpillar machinery stand out on a construction site and might also explain why yellow is seen in several brands across the construction industry, including Caterpillar’s large British rival, JCB, and toolmaker Stanley.

But it is the latter that helped it extend the brand to footwear, workwear, smartphones, and the various other popular Caterpillar products we see today. Yellow is associated with, warmth, positivism, and the exact rugged, outdoorsy quality that Caterpillar is hoping to evoke in all of us.

For other yellow brands, think The Yellow Book, Post-It Notes (the yellow color of which is trademarked), National Geographic, and The Wiffle Ball Bat (another trademarked yellow). 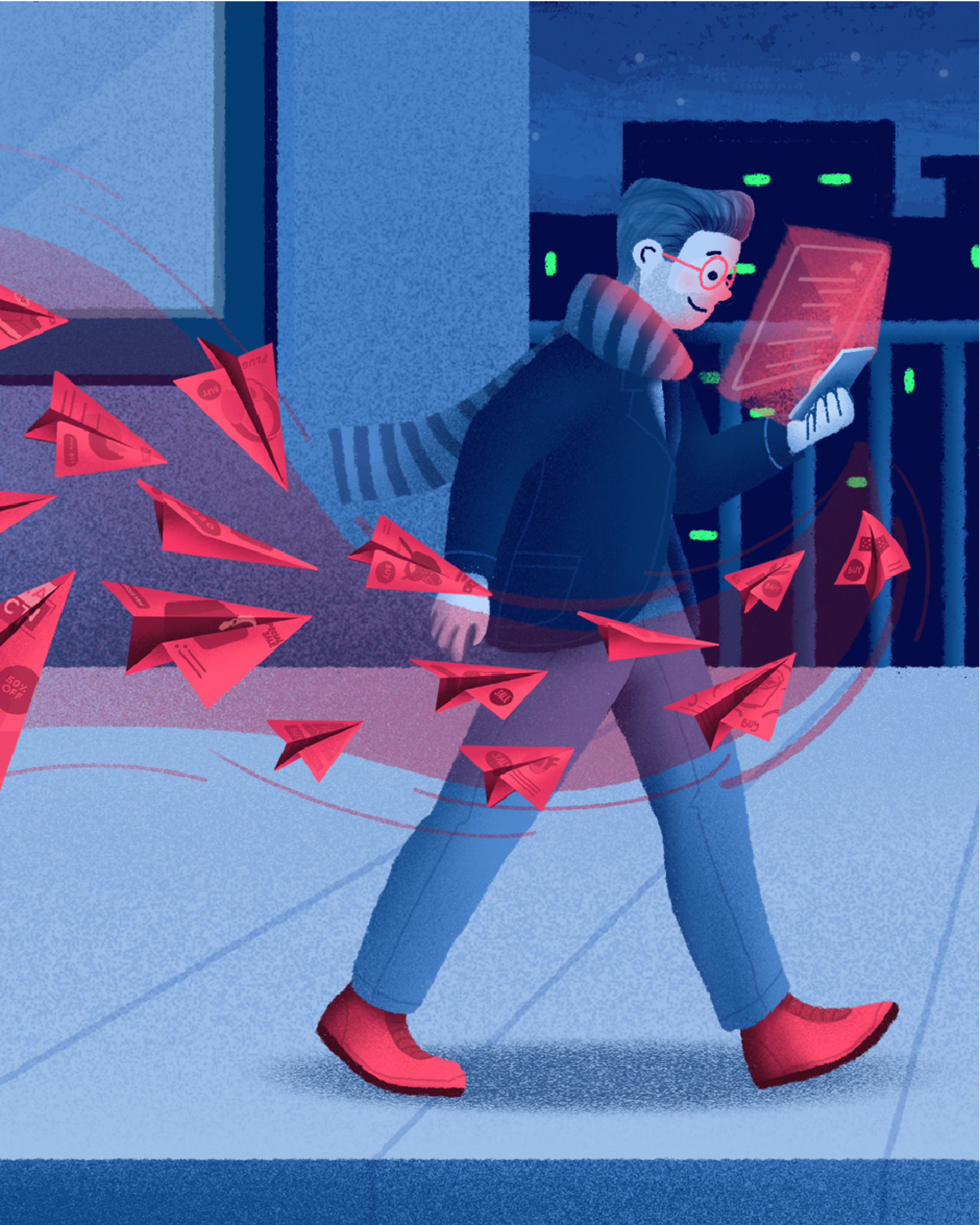 Start creating out-of-this-world ad designs! Get industry best practices from experts at Slack, Outbrain, Amazon and more about how to best advertise on all major ad platforms. 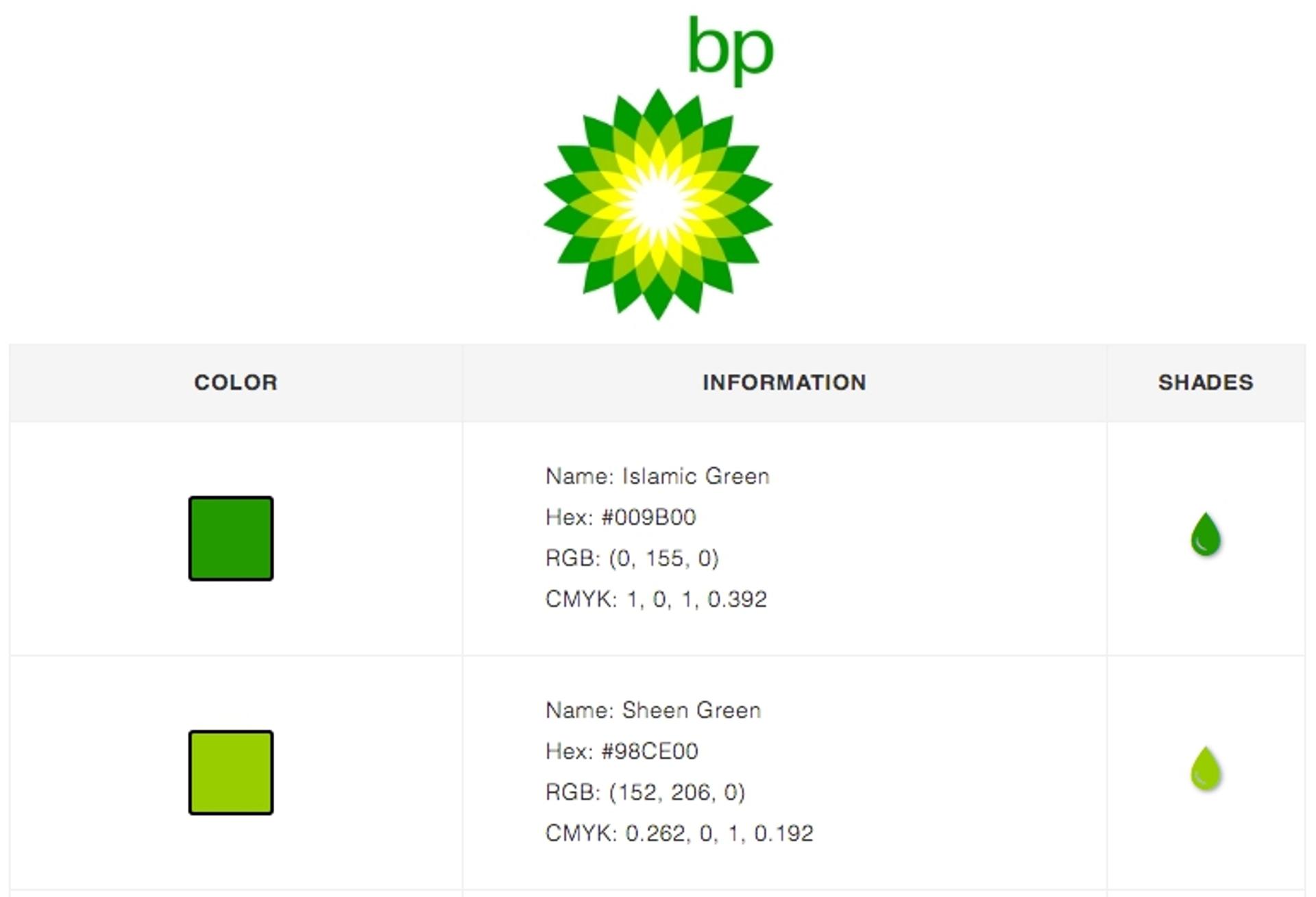 Other than red and “danger”, there may be no stronger association between a color and a concept than that of green and the environment. The word green has,quite literally become a synonym for eco-friendliness.

So much so, indeed, that it would be hard to imagine a company that was keen to emphasise its environmental credentials not having green in its logo or branding color palette.

In addition to representing nature and eco-friendliness, green is also said to signify growth, equilibrium, stability, peacefulness, and health.

But green is also a good example of how a company might use the positive associations with a color as a way to try to shift consumer perceptions of it as a brand.

Energy company BP is perhaps the epitome of this. Since the turn of the millennium, it has emphasized the use of green in both its logo and branding color palette. Its aim? To create the impression that it is focused primarily on the environment – in effect, the exact opposite of what fossil fuel companies are traditionally associated with.

How successful BP has been in this ecological appropriation remains open to question. But who is to say whether, even if only subliminally, the vibrant green may not have had some effect on our perception of the company? 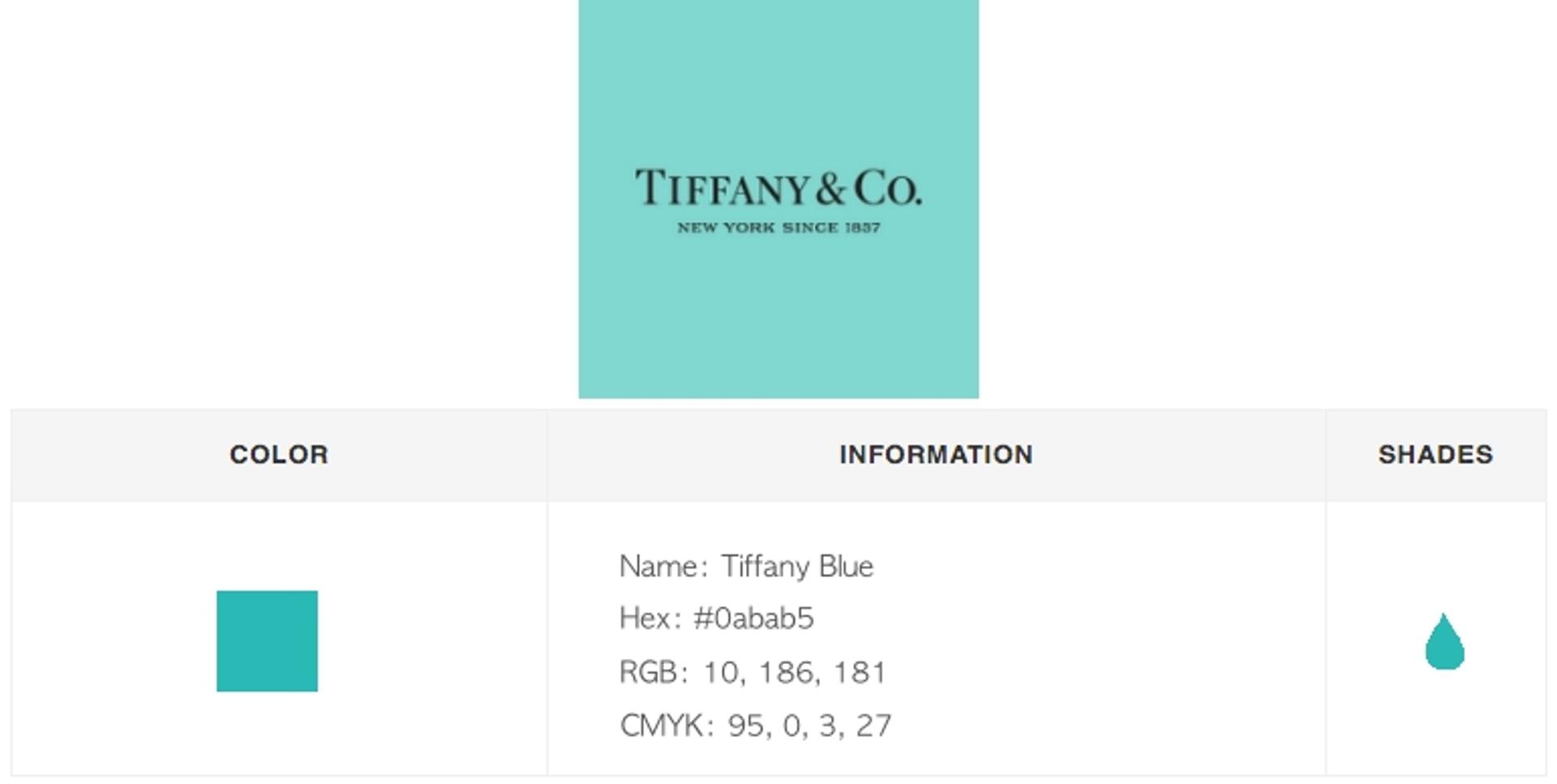 Given how iconic the color is (it has its own Wikipedia entry), “Tiffany Blue” is perhaps most notable for the fact that it isn’t particularly blue at all. Or at least not the royal blue or navy that we might instinctively think of when calling the color to mind.

But that doesn’t make the pale, robin’s egg color, trademarked since 1998, any less impactful.

Tiffany Blue evokes feelings of elegance and luxury, but that’s not necessarily true of all blues. Lighter blues are more typically associated with tranquility, openness, and innocence, while darker navies evoke a more mature professionalism, security, and trustworthiness.

Interestingly, while western cultures generally see blue as a masculine color (a prime example, being Viagra, “the little blue pill”), Chinese culture typically associates blue with women. This goes to show that, particularly in today’s increasingly global marketplace, brands will increasingly need to be attuned to the (potentially divergent) impression of different colors in different countries when picking the hue to represent their brand. 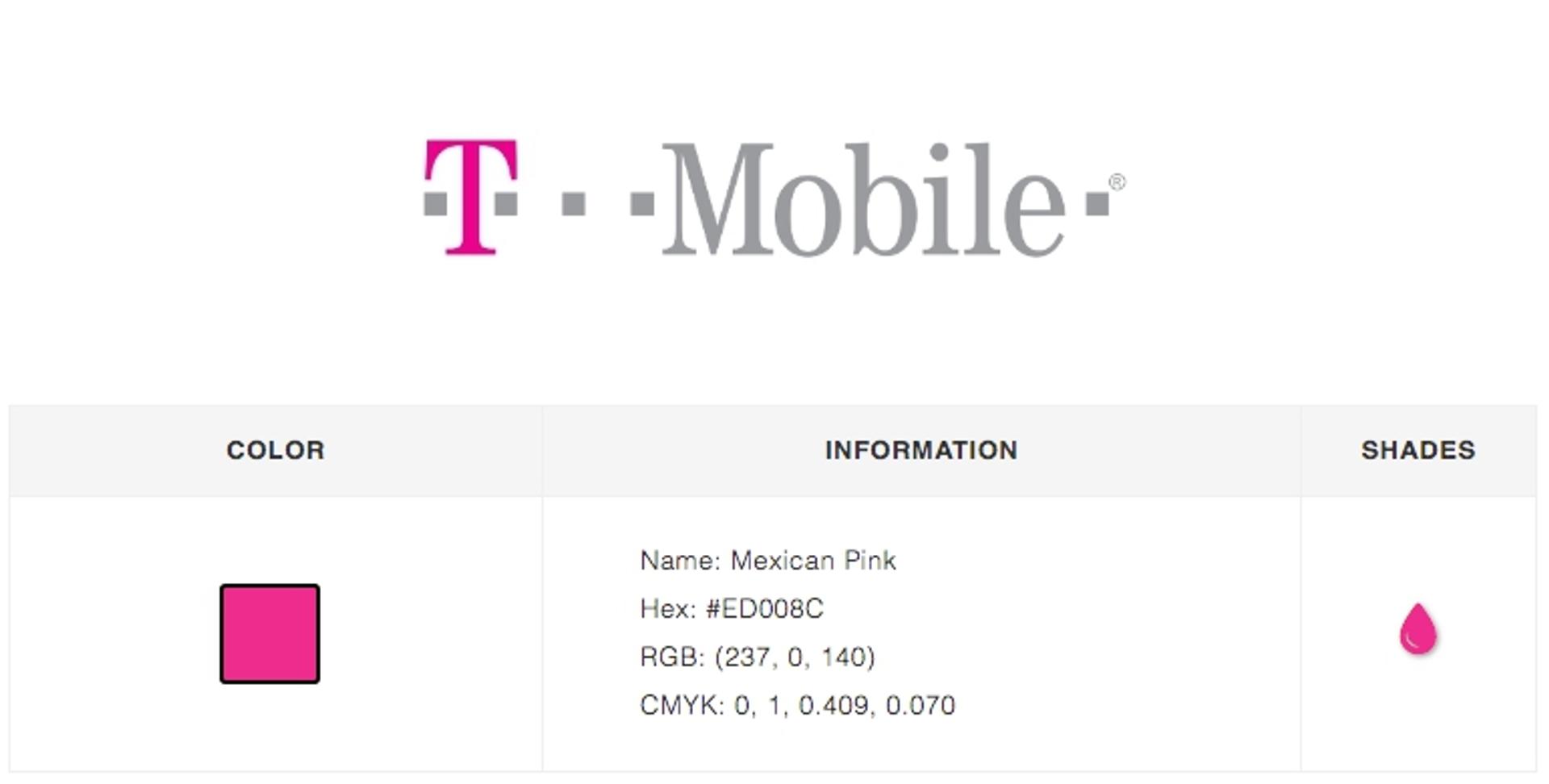 Compared to the other companies on this list, T-Mobile is by far the youngest. It entered the US market as a brand in its own right as recently as 2001.

And yet, its signature magenta logo is one of the most recognizable around. And, as with many companies on this list, the association between the color and the brand has developed sufficient cachet and distinctiveness to warrant trademark protection.

Why T-Mobile opted for magenta over other colors isn’t wholly clear, but from a color psychology perspective, the choice is certainly one that makes sense –  pink, specifically vibrant, ‘hot’ pinks like magenta, are associated with fun, love, and youthful energy.

Traditionally, pink also evokes a femininity that is less relevant to T-Mobile, but has certainly been central to many other brands’ choice of pink as a brand color, most notably Barbie. 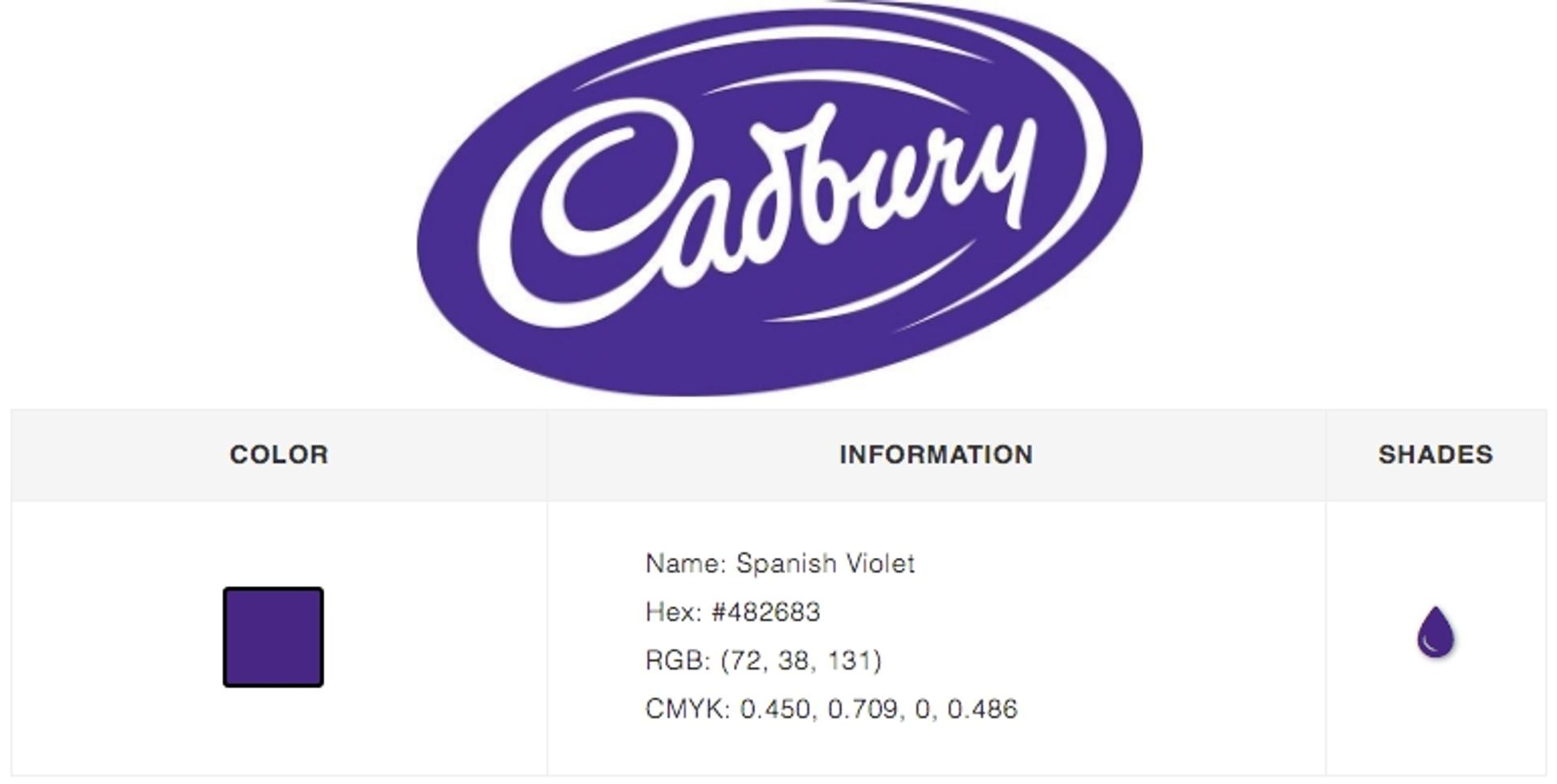 If you speak to someone from the UK, there are few brand and color combinations more iconic than Cadbury and the signature purple (Pantone 2685C) that it has used since Victorian times. The story has it that purple was Queen Victoria’s favorite color, which is why the Cadbury brothers chose it for their early packaging.

In addition to that regal aura, purple is associated with creativity and unconventionality, something Cadbury has also leaned towards, particularly in its advertising. Its recent commercials have featured everything from eyebrow-syncing to drumming gorillas, each with the signature purple heavily featured.

That’s just a snapshot of the ‘rainbow’ of colors with which some of the world’s biggest brands have sought to associate themselves with. There are, of course, other colors and companies that will always be connected – whether its UPS’ brown, Apple’s white, or Guiness’ black.

What’s also clear is that some of these brands, in effect, got lucky. Colors that were chosen for largely practical reasons also happened to evoke exactly the kind of psychological responses and associations that a marketer may have chosen if they’d been given free rein.

When it comes to choosing your brand's colors, think carefully about what they may convey to your potential audience. For example, green and red may be a great color combination for a holiday or Christmas ad, but not so much for a law firm.

If you want to take the luck out of choosing colors that work for your brand, contact Superside now to tap directly into our pool of specialist design talent. 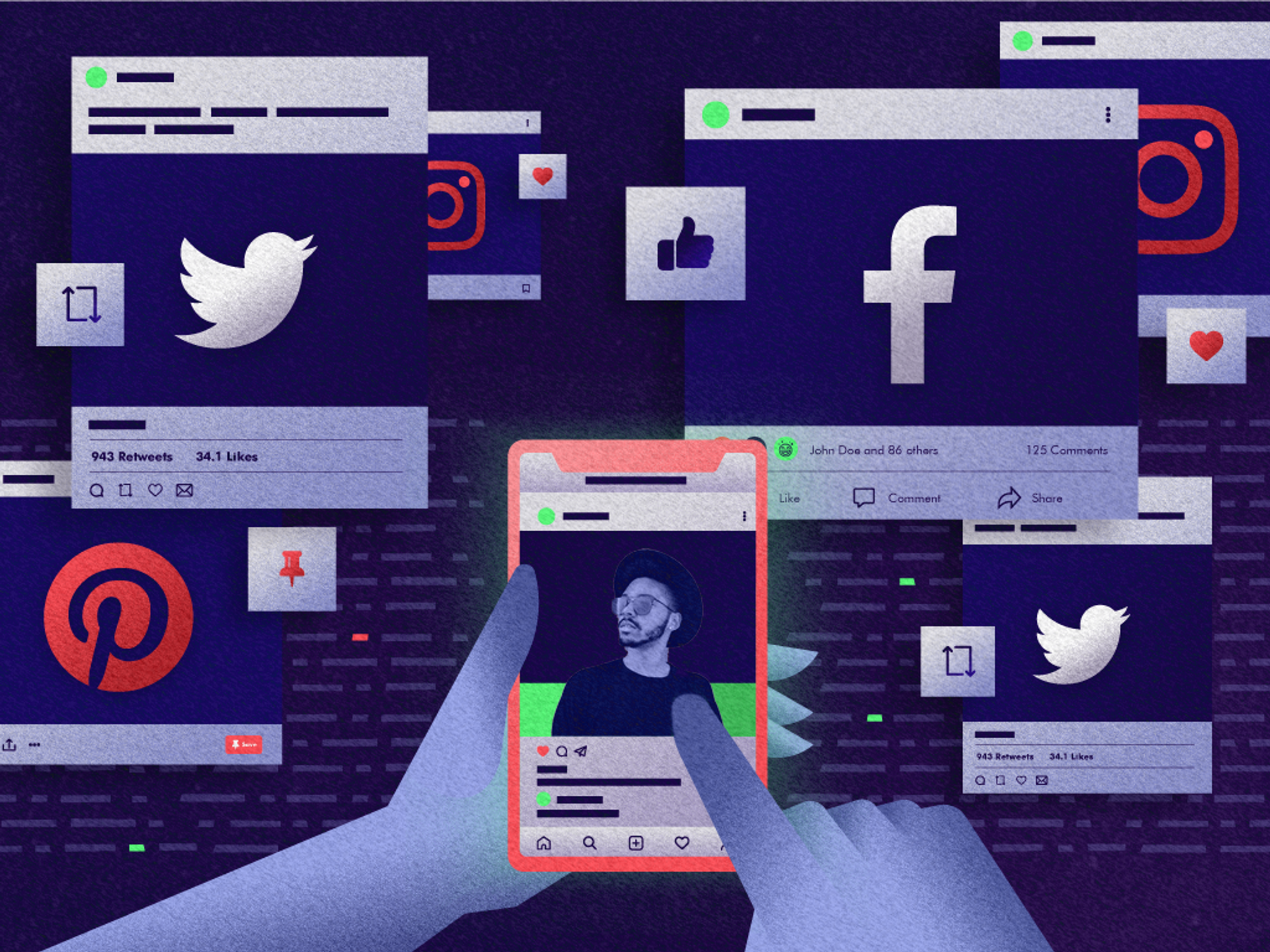 Superside delivers design at scale to over 400 businesses. Let's find the right solution for you.

Simon Constantine is a British writer based in Singapore. After years as a lawyer, Simon now splits his time between writing, volunteering and dreaming of once again being able to watch his favorite English soccer team at a reasonable hour.